The Headache of Colour Touch

You finally decide to take the plunge and purchase that key comic book you have been eyeing for months.  You buy it and quickly contact your go-to comic book presser (The Comic Doctor, right?) to have the comic cleaned and pressed prior to having it graded.   A while later, you receive a call from said presser with the bad news:  Your comic book has color touch on it.  A severe headache ensues.

Look, finding out one of your prized comic books has color touch on it isn’t the end of the world.  In many cases, the color touch can be removed, and sometimes, without affecting the comic book’s current grade – at least not by too much!

Color touch is a sneaky little bugger that can sometimes evade even the best of eyes, in fact, I have cracked CGC universal blue label comics, worked on them and re-submitted them only to receive a color touched classification.  This happened recently with a client’s Hulk 141.  The comic was a 9.0 universal blue label.  After cleaning and pressing the comic book, I re-submitted it and it came back with a 9.6 purple label indicating “small amount of colour touch on cover”.  I didn’t detect it and nor did the original CGC graders.

It’s Been Around a Long Time

Color touch has been a part of comic collecting for decades.  If a perfectly fine book had a little bit of color break along the spine or elsewhere, a marker went a long way in making the comic look that much better.  Due to the ease of such a fix, it was common practice by amateur and pro restorers both. Since the advent of third-party grading companies, however, a spot light has now been shone on color touched books, with many a collectors and dealers reeling in disbelief when one or more of their comic books end up with a restored label due to color touch.

The Best Mode of Defense Against Color Touch

Keep collecting, and if you are unsure if one or more of your comics has been restored, feel free to pop by my shop and I would be happy to give you my opinion.  And, if you need to have your comics cleaned, pressed and/ or graded, be sure to contact the Comic Doctor. 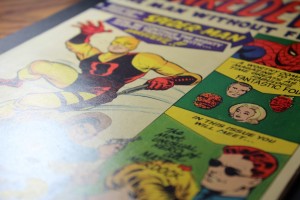 The Comic Doctor is an authorized CGC member dealer and as such can submit comics on your behalf to CGC.    The following is important information regarding our submission service.         For Clients with 20+ Books 20-25 books per submission  … END_OF_DOCUMENT_TOKEN_TO_BE_REPLACED